In response to our post Broader Notions of Two, Amsterdam-based dancer and researcher Bertha Bermudez wrote this very thoughtful reply:

“I keep thinking on what you wrote about two-ness in relation to time, space, social relations and the first main word I keeep thinking of is awareness. The act of reflection that is implied when dancing is, for me, the trigger of many of the forms of two-ness you are describing. When executing an action we are constantly busy with the path of it, or its evolution. Such a state needs of our attention to be placed on past events while executing new ones. Our present is a constant relationship between past experiences and their outcomes: potentials. We are then always split into two realities, the one we are living in and the one  being created. I think my words to you while I write , I see them appearing on the white screen allowing me to reflect upon them and take the next decision. I am in constant state of duality with my awareness of time, experience, space, goals. Dancing is based on such duality and for me movements are the representation of such mental states, where a constant flux of events is being created. Another thought is that of dance being part of a communicative act, where the need for transmission of a certain concept, state, or idea drives the need to perform. In order to communicate we need two ends, the sender and receiver, two different embodied worlds that do their best to understand each other. I find fascinating the fact that as human beings we will make all possible efforts to decode meaning. Your  comment on the dancers making choices in relation to what they consider Bebe is interested in is for me a perfect example of this. In communicative sciences this is called inter-comprehension. Something else that is super important that I see in your new project is the fact that it brings the role of the dancer to the center of attention. We have been focusing in the past projects on the perspective of the maker. Here the dancers are invited to present their role in the production of choreographic knowledge which is super important. This opens a space for a lot of new thinking and inspires new modes of defining, talking about what dance is….Thank you!!” 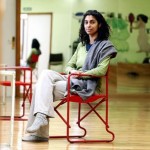 Bertha Bermúdez Pascual is a former dancer in some of Europe’s leading dance companies, Frankfurt ballet, Compañia Nacional de Danza in Madrid, as well as Emio Greco | PC, then having turned towards work in dance documentation. Bertha Bermudez has been between 2007-2011 part of the research group Art Practice and Development, headed by Marijke Hoogenboom where she focuses on the theme Dance Transmission as a source for dance documentation and since 2009 coordinator of the Accademia section of research and education within the International Choreographic Arts Center ICK under the direction of Emio Greco and Pieter C. Scholten. Together with Maite Bermudez, Bertha is the director of the foundation Las Negras productions where projects around new collaborations between dance and cinema are generated.