We started this project with an interest in working at a smaller scale then our previous project and focusing on choreographic ideas as they unfold between two people in the duet form. This was a natural link to Bebe Miller’s new work “A History” which focuses on the choreographic relationship between her and two of her dancers, Angie Hauser and Darrell Jones, over several years and their individual and collective movement histories.

As we delved into this we became less concerned with the nature of the duet per se and instead were drawn into the different movement identities, tensions, and synergies that dancers and choreographers negotiate within their own bodies and with and between each other. This is particularly evident because we are involved in Bebe’s creation process with her dancers and we are most often observing rehearsals and directed improvisations. So our focus on duets was replaced by an interest in broader notions of two, which could also include the simultaneous embodiment of two different ideas within one body.

With the number 2 comes a weighty history in western thought. Twos easily invoke age-old dualisms and binary oppositions. As an artist who enjoys philosophy and teaches critical theory to graduate students, I knew I couldn’t approach the notion of “two” in our project without acknowledging and revisiting these issues. There are the early moral dualisms of good and evil stemming from the monotheistic religions. And of course the persistent schism of mind and body inherited from Descartes. And the formulation of binary oppositions and their hierarchies as a habit of western thought: man/woman, culture/nature, human/machine, white/black, inside/outside, subject/object. As feminist philosopher Elizabeth Grosz writes, “dualism is the belief that there are two mutually exclusive types of “thing,” physical and mental, body and mind, that compose the universe in general and subjectivity in particular” but, she continues, “subjectivity can be thought, in its richness and diversity, in terms quite other than those implied by dualisms.” Grosz uses the metaphor of a Mobius strip (with a reference to Lacan) to suggest other ways of thinking about twos. And there a many other productive alternative metaphors. But for our purposes I’m interested in those that are in action. Returning then to choreography and to Bebe Miller’s work, I wonder how these dualisms are or are not re-enacted and how her choreographic knowledge might already be contributing to the richness and diversity of subjectivity that Grosz suggests.

One thing that is suspicious and pernicious about dualisms is their performance of stability. They seduce us into thinking that there is a clear and stable subject (for instance) and a clear and stable object. Or that human and machine are mutually exclusive. It takes only a momentary meditation on pharmaceuticals, gender, finance, or agriculture in contemporary life to feel those distinctions begin to unravel. It has been the work of much of recent philosophy to deconstruct these categories of being and demonstrate how richly entangled they are. But in moving through this vast review of dualisms I also came across an earlier reference through the mention of “two-ness” in a curator’s note. A little research revealed that W.E.B. Du Bois originally coined the notion of two-ness or double consciousness in 1903. For Du Bois, two-ness was a way of describing the African American experience in the early twentieth century. In The Souls of Black Folks he writes, “one ever feels his twoness – an American, a Negro; two souls, two thoughts, two unreconciled strivings; two warring ideals in one dark body, whose dogged strength alone keeps it from being torn asunder.” For our work focusing on dance, I’m particularly drawn to the dynamic pull of unreconciled strivings in Du Bois statement and the acknowledgment this gives to the tensions that occur in the number two.

One thing is to blur the boundaries of categories, to undo the ‘2’ and make it a big complex ‘1’. Another way is to show that the two are always connected (as in the inner and outer edge of the Mobius strip). Perhaps another is to acknowledge the simultaneity of more than one idea in the body, more than one idea in a category and the pulls and pushes at work within. A time-based approach. And while the term two-ness was coined for a very specific cultural and historical experience, it is an idea that has also had resonance for many others interested in the complexities of identity and how we negotiate and move through multifaceted ways of being in the context of our lived experiences. Two-ness is referenced by those interested in gay and lesbian identities, immigrant experiences in the diaspora, the lives of working mothers, cyborgs and so on. I find it useful as a way of re-thinking all manner of dualisms. It is not a matter of on/off in our identities and ways of being in the world but rather the simultaneous pull of more than one consciousness or striving. 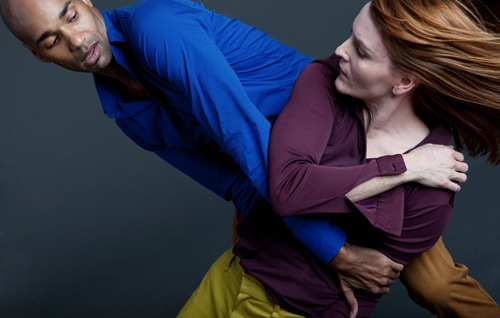 So then what, if anything, might choreographers know about this, what, if anything, can we locate in the movement knowledge that is dance to help us experience, express, and explore contemporary multi-consciousness? This brings me back to Bebe and a few very concrete suppositions.

As I mentioned, I’m particularly drawn to idea of “two unreconciled strivings” for its dynamic movement associations and can see direct links to choreographic ideas in Bebe’s work and her creation process. For example, in our first residency with the Company, Angie described moving from her own impulses as well as what she called “Bebe-ness” which can be understood as the found set of movement choices that she knows Bebe will be drawn to based on Angie’s history of performing Bebe’s work. So even in an “open” improvisation the dancer is already working within the container set by the director or choreographer’s values and is therefore embodying two souls, two thoughts. Darrell echoed this sensation as well. He makes different choices when working with Bebe than he does when working with Ralph Lemon or making his own dances. This is perhaps obvious but somehow important not to overlook. So then in the formation of choreography (the formation of choreographic knowledge?) the simultaneous strivings of the dancer and the choreographer interact in productive tensions. Ok, fine. But then of course, there is another form of two-ness at work in the dancing and that is the movement relationship between Angie and Darrel. Here we see the dancers negotiating their movement choices (can these be understood as identities?) according also to the choices made by the other.  I find myself wanting to make a diagram of the vectors and forces between the dancers, within each dancer, between dancer and choreographer, and then perhaps in relationship to viewer. That’s one place my mind goes.

On another level, I see two-ness in some of Bebe’s characteristic directorial strategies, for example she often directs the dancers to “start in the middle” of an action and to cut movement that is ramping up to the action. She works to “interrupt the inevitable,” moving dancers away from what is comfortable and taking a fall of weight and redirecting the line of action mid-way. Or perhaps even more clearly, Angie describes “bebe-ness” as frequently involving the effort to begin a new action in one part of the body while still completing another action (and its distinct timing) in a different part of the body. An arm floats softly down an established arc while a leg slices quickly through space carrying the body weight off center.  There is a two-ness in timing there as well, with a suspended timing in the arms and a more percussive impact of the leg. It is the un-reconciled nature of these strivings that gives them dynamic potential. This is distinct then from Du Bois who was articulating also the violence this enacts on the psyche, the ways in which one is “torn asunder.” Perhaps the choreographic knowledge here suggests a way to move through and negotiate different impulses without being torn but also without losing the productive tensions. I’m not sure yet. But this is where we are.