In examining the motion capture work from our January residency with Bebe Miller Company we are becoming interested in the possibility of tracing the momentum transfer through the body. The paths of momentum transfer reveal patterns of movement sequencing in the body. In both Darrell’s and Angie’s performances it is evident that several motions often happen concurrently. Performative tendencies that focus on simultaneity and dis-coordination of body segment motions are likely to interrupt viewer’s ability to anticipate movement and thus create fresh and surprising performance qualities.

There are a number of ways to approach visual representation of movement sequencing, and I thought it might be interesting to see this by making visible the sequences of joint rotations.  To set up this visualization I hypothesized that the initiating joint would rotate first, sending the waves of sequential rotations to the other parts of the body.  In the video of Darrell’s performance it is easy to notice many instances when sequences of joint rotations are initiated simultaneously or with minor offsets in time . I have used color coding to present two types of joint movement analysis.  The red figure indicates angular/rotation speed of joints (A) (the brighter the red the higher the speed), the green figure indicates linear speed of joints’ locomotion (L). As opposed to joint rotation speed, visualization of the linear (joint translation through space) shows a more even speed value distribution that is more sequential.

Since these may be a bit hard to notice at high playback speed of the captured motion this movie is at 1/4th speed.

While working on ideas about momentum I ran across a video on momentum transfer in parkour.   In this video, the second jump comes as a surprise. In order to get additional momentum to make the second jump possible, the landing position after the first jump had to be exaggerated… At a quick glance the shape of the body at the time of the first landing seemed to be that of trying to slow down.  By exaggerating this pose through leaning back and further lifting the arms backwards, it is possible to gain additional momentum. This hidden quality of getting the additional momentum is very intriguing as it also serves as a way of hiding anticipation of subsequent action. This triggers parallels between the animation concepts of motion anticipation and exaggeration and Bebe Miller’s ideas of “interrupting the inevitable” as well as “furthering”.

Animation and Choreography in the classroom

The relationship between choreography and animation is symbiotic. Each time Norah and I collaborate across our disciplines, we reaffirm the desire to construct a course that explores both choreographic and animation approaches to movement, by integrating both dancers and animators. (I don’t know of any example of such a course existing in college curricula, but if you have knowledge about it – please send us a note.)

This Motion Bank project has inspired us to try an exercise in getting animators and dancers working together. Using our two co-scheduled Spring 2013 courses (Expressive Animation and Interdisciplinary Creative Research Seminar), we designed an experience for our animation and dance students that engaged them with Thomas Hauert’s Careful Scientist exercise.

We began by introducing the students to Thomas’s exercise by looking at a video of his performance.  In the Careful Scientist exercise, Hauert defines a limited set of instructions or rules for moving the body. He defines the rules of the system in such a way that they challenge mind/body habits.  In order for the students to better understand the work, concentration and coordination necessary for this exercise we had them practice some of the basic concepts by trying these movements in groups with others assisting.  Next we presented the students with some of the data of the Careful Scientist that we had motion captured during one of Thomas’s residencies at ACCAD. This provided a rich data resource of 3D positions and timings that describe the movement.  We then challenged the students to reuse existing motion captured movement data to re-imagine and design a new system of relationships, driven by existing movement data to become a new movement phenomenon. Three outcomes from that assignment follow,  accompanied by the students’ explanations.

Concept: “We are using the data of an unnatural movement process and placing it on a natural environment. We are creating movement in the animation that is driven by external forces (like wind) while the careful scientist is propelled by internal choices. “

Concept: “I used a motion capture of the Careful Scientist by Thomas Hauert to create a visual parody on the hybrid theme prevalent in art and technology work. All the motion is a combination of the Careful Scientist, at different speeds and directions, with altered key frames to influence the gestures and correct for problems translating a human’s motion to the altered anatomy of the characters. The combined motion is intended to be dis-articulated, awkward, and hyper extended; alluding to a dysfunctional parental couple whose behavior is compounded through their child. “
Tech notes: “To start, I sped up the motion capture data, duplicated it, translated it forward, and attached both to the spoon. Then I duplicated the motion again, and broke it down into key frames in places where the hand went through the head and moments that I decided to make the existing gestures more like an argument. I wanted the fork to have a slightly different personality, so I took the key frame motion path, duplicated it, reversed it and attached the motion to the fork. The spork’s motion is the same as the spoon, without the argument key frames, and not quite as fast. “

Concept:  “Dance scholar Susan Leigh Foster describes improvisation in dance as ‘bodyful’ dwelling in the perceptual gap of the conscious and the unconscious. Continuing the quest of the unknown through digital inscription of dance, we argue that digital ontology exists in corporeal materiality of the performing body as performatively, affectively and digitally mediated in the animation of Hauert’s Careful Scientist. Through Butler’s reading of ‘citationality’, in which ‘matter is constructed not as a site but as a process of materialization that stabilizes over time to produce the effect of boundary, fixity, and surface we call matter’, the digital is ontologized in Hauert’s performativity.” 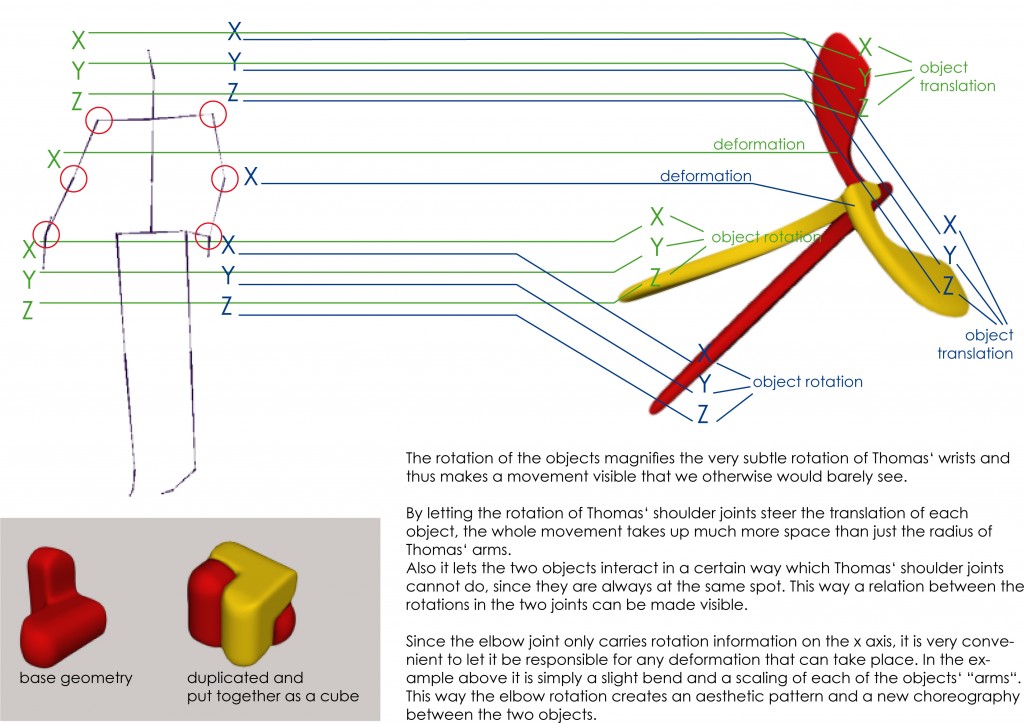 ACCAD animation specialist and motion capture expert Vita Berezina-Blackburn has continuously pushed our Center in thinking about unconventional ways to use captured motion. As an animation artist and collaborator on Bebe Miller’s Landing Place her work demonstrated the aesthetic beauty that can result from expertly combining captured motion and form. Take a look at some of Vita’s work from Landing Place.

Allowing for the Unknown