As part of the Two Project we decided to construct a timeline of Bebe Miller’s choreographic work history. The basis of this artifact making was the ongoing discussion with Bebe about how the direction of her work is deeply influenced by the world around her.  Bebe describes her work as an “interest in finding a physical language for the human condition.”   The design of a timeline seemed to be an effective choice to place next to each other both world events and choreographic work to help us to better visualize how they are connected.

And of course in her newly evolving work, “A History” Bebe re-examines with dancers Darrell Jones and Angie Hauser and dramaturg Talvin Wilkes how their creative context has evolved within the Bebe Miller Company over the last ten years.  So it was our hope that the timeline could also function as an organizing vehicle for the Company to reflect on as they add their personal data.

To begin our artifact construction I enlisted ACCAD Graduate Research Assistant Sheri Larrimer’s (Design) help in creating a chronological structure on a large pin board at ACCAD made up of index cards and Post-it notes.  The cards were dated starting at 1986 and going to the present and pinned across the top of the board. Previous to the Company arriving for the January residency we asked each person to think about their own personal history in relationship to the Company. We used color-coded Post-it notes for various kinds of information and initially just started by listing significant world events and titles of Bebe’s choreographic works that we had in our records under the appropriate years. Once we were together in residency, Angie, Darrell, Talvin, and Bebe all contributed significant personal and professional events to the board focusing on the evolution of the working process in the Company.  We also asked them to indicate which of the listed world events had significance to them personally and to add others if needed. 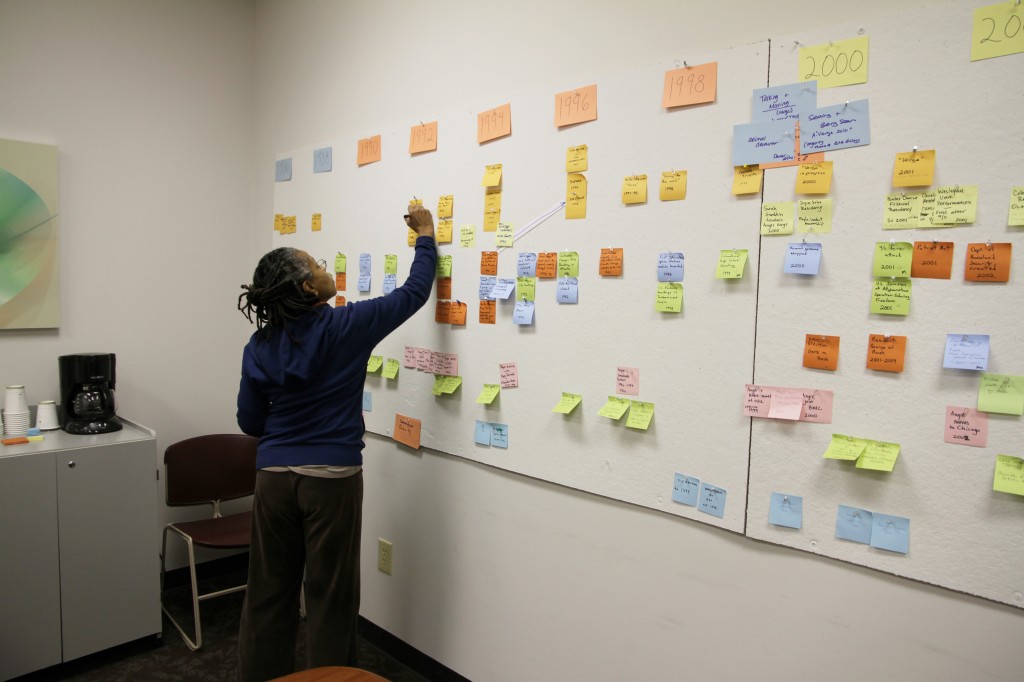 Within the timeline five distinct categories emerged from the making that include Choreography, Vocabulary, Personal Events, Historical Events, Workshops/Residencies.

As the timeline unfolded several design issues regarding our format were raised.  The most obvious was the linear nature of the content.  In other words, even though we now had a lot of good information in chronological order it was still difficult to understand relationships and influences between the information.

Since this is an important and perhaps more complex undertaking it became a central research interest that will work with and address as we go forward. Our process and outcomes will be covered in this blog.

So, with all of the information posted, Sheri then carefully transcribed all of the timeline material into a spreadsheet for review by the Company and for use in building an online, interactive artifact – the timeline.

In the meantime I did some research into what existing software was available to create an interactive timeline that can be embedded into websites.  The two best choices seem to be Tiki-Toki and BeeDocs Timeline3D.   I decided to go with Tiki-Toki, as their design aesthetic is strong, it’s OS independent and it’s free!   We are starting to load in the data now and gather more data as we notice gaps.   I have included a screen shot of some of the work in progress. 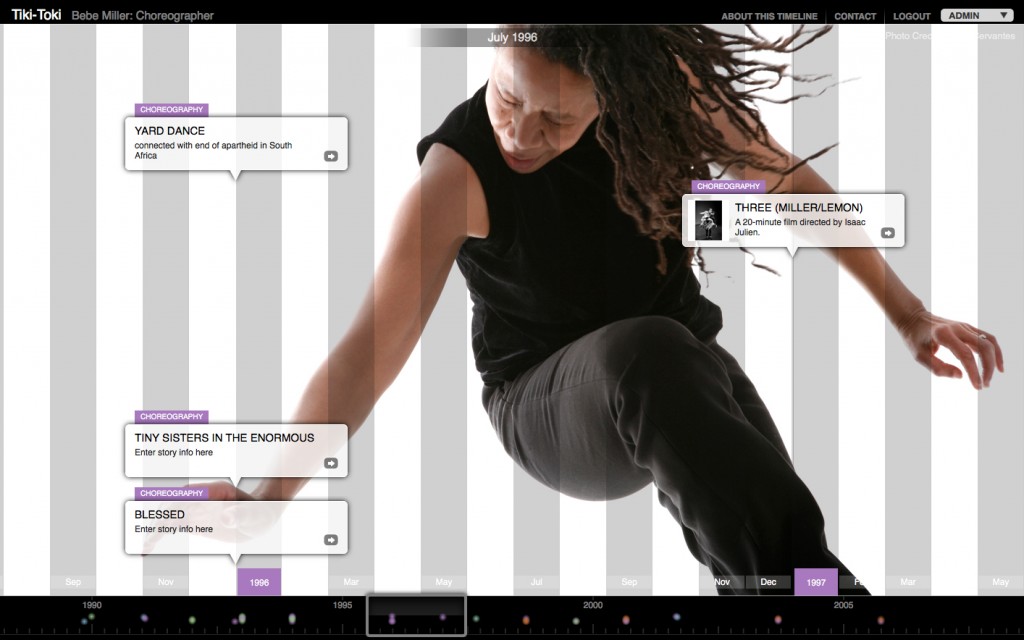 Screenshot of timeline for Bebe Miller

Eventually you will be able to access this timeline online and to see the chronological development of Bebe’s work as well as video, images and audio recordings that will supplement the materials in the timeline.

It seems important to mention here that the Ohio State Libraries are organizing a permanent archive of Bebe Miller’s materials for researchers.  This is available for study as part of the Theatre Research Institute under the direction of librarian Dr. Nini Couch.